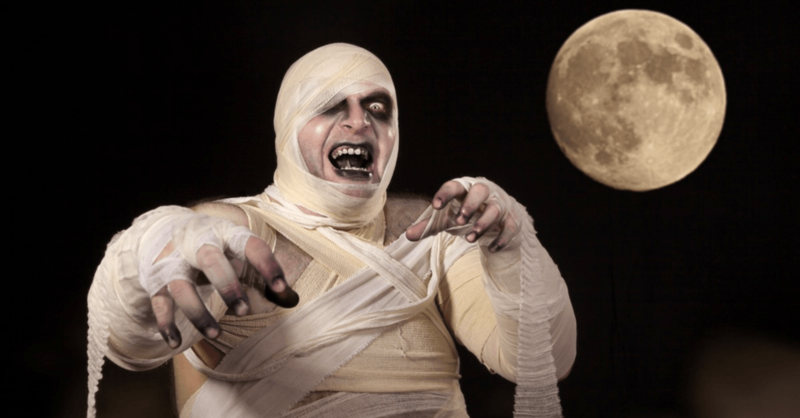 Halloween kickstarts the annual holiday shopping season frenzy with an estimated 171 million consumers expected to contribute to a projected retail spending of $8.4 billion in the US alone this year.

Though not typically a gift-giving kinda holiday, consumers spend on F&B, decor and costumes. Even those who don’t celebrate the spooky-themed day confess to being more lax with their sweet tooth indulgence during this period.

For brands, Halloween is the time when they start having a little more fun with their marketing campaigns, attempting to trick-or-treat their consumers in innovative ways. We’ve unearthed 13 of the most memorable campaigns that’ll entertain the bejabbers out of you. Enjoy!

During Halloween, Pizza Hut’s business is about 50 percent busier than on an average day. The pizza chain teamed up with video agency Shareability to produce their “How to Win at Halloween” video showcasing the dos and don’ts for making Halloween exciting again. It also advocated the giving out of pizzas instead of the typical candy as treats.

Target launched an interactive 360 degrees video series allowing viewers to explore several cobwebbed rooms with the option to shop for the featured items in each room. They also created Treatster — the first social network designed exclusively to help parents map out the ‘must-visit’ houses on each block for their trick-or-treaters.

3. Cheetos: Thinking Outside the Box

To promote their “Trick of Treat Pack”, Cheetos teamed up with restaurant delivery service Caviar to produce videos capturing real life customers being pranked. The mischievous campaign was an ingenious way to offer viewers an alternative treat during a time when most were thinking about candies.

4. Airbnb: A Night in the Catacombs

Accommodation rental site Airbnb ran a contest which offered the winning party of two the opportunity to spend a night in the Paris Catacombs. To qualify, interested participants had to explain why they thought they were brave enough to sleep in the largest tomb in Paris. The winners also enjoyed “an unusual culinary experience while listening to an underground private concert”.

As part of Chipotle Mexican Grill’s Halloween fundraiser campaign, the fast food chain produced a satirical video highlighting the creepy unnecessary additives and preservatives found in traditional fast food. Customers in their Halloween costumes who added an unnecessary ingredient to their outfits qualified to purchase burritos at a special $3 price. Proceeds up to $1 million went to benefit the Chipotle Cultivate Foundation.

Ford convinced some of its test driving customers to visit a car wash which, unbeknown to them, was manned by some really creepy characters. The results — a bunch of really freaked out customers and a spot in the year’s list of ‘World’s most shared Halloween ads”. Way to leave an impression for your brand.

The UK’s second largest supermarket chain released a fun “Spooky Speaker” voice distortion app as part of its efforts to promote its line of Halloween-themed costumes.

10. Reese’s: Make It a Perfect Halloween

The peanut butter cups brand created this hilarious TV spot starring the Headless Horseman and a Jack-o’-Lantern in desperate need for a Reese’s fix.

11. Atomic Candy: Trick Until They Treat

The Texan confectionary created a unique commercial featuring a clown who terrified a piñata into producing candy, in a rather unusual way.

However, Halloween isn’t the scariest day of the year according to Atomic Candy.

British supermarket chain Tesco’s playful Halloween campaign involved filming a hilarious video of its staff ambushing customers with the likes of ghoulish butchers and spooky severed heads hidden amidst toilet rolls. Viewers were then prompted to watch other videos teaching them how to create their own DIY Halloween novelties at home.

This was perhaps the scariest campaign of them all — offering monster loads of Halloween candy to kids. The horrendous effects were recorded in Oral-B’s Halloween video targeted at their Nordic market. Fortunately, Halloween candy poses no adverse effects on teeth, thanks of course to Oral-B.

What They Don’t Want You To Know About Text Marketing (Part...