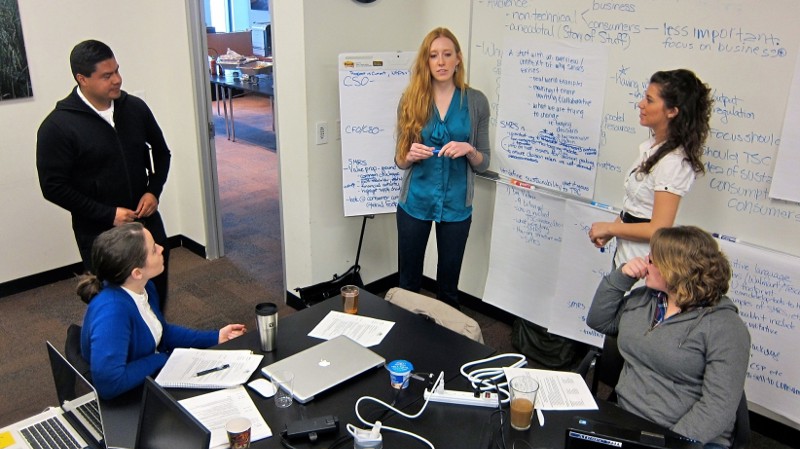 There are about 11 million meetings taking place in America every day, and a third of them are unproductive. Chances are you are spending some of your time in some of those unproductive meetings. The good news is that there is something you can do about it!

Here are some ways you could alter your behavior to get the most out of your next meeting.

1. Convince someone without a direct conversation.

2. The power of the notetaker.

Everyone is familiar with the kinds of meetings that turn into heated discussions. It starts with two people who would probably define themselves as A Personalities and consider themselves the smartest people in the room. Outsmart them! Control any meeting by interrupting the discussion with an offer to take notes.

Every person will feel appreciated by you because you value each and every opinion by writing it down. Additionally, people will wait for you to finish writing down points and look to you for guidance. This is a great trick for introverts. Use a whiteboard to maximize the leadership effect.

3. Increase your testosterone on purpose.

With 25 million views and counting, Amy Cuddy’s “Your Body Language Shapes Who You Are” is one of the most watched Ted Talks ever. She was able to prove for the first time that holding different postures for two minutes has an actual impact on our hormone levels.

Conversely, non-dominant postures such as sitting with a round back make us less assertive, less confident, more stress-reactive, even to the point of feeling shut down. In brief, you can control your confidence, risk tolerance, and more by choosing a dominant body posture. Examples include placing both hands behind your head while leaning back or firmly in front of you while leaning forward.

The way you dress impacts your success because others assess your leadership depending on what you are wearing. Lefkowitz, Blake, and Mouton experimented with clothing and perception in 1955. Turns out more people followed a man in a suit when he crossed the street against the traffic than when the same man was dressed well but not in a suit.

In 1974, Bickman performed a similar experiment where people were addressed by differently dressed people and asked to help a man who didn’t have enough money for the parking meter. Again, people obeyed the more formally dressed people.

More recent studies show that the way we dress not only affects how others feel about us but also how we feel about ourselves. If you have ever been at a Starbucks on Wall Street, you will remember being surrounded by blue suits, white shirts and red ties. While the reasons seem to be that this is what investment bankers and sales people are “expected to wear,” the attire screams confidence and dominance. Additionally, blue suits come across more trustworthy, white shirts more honest and skilled (think doctors in white coats), and red ties add pressure and aggressiveness. Similar to color psychology in web design, the color red increases the heartbeat and makes us feel like we need to take action.

5. The boss chair and the influence chair.

Throughout history, kings have made their most trusted advisor “The Right Hand of the King,” among the most sought-after positions in medieval age.

The Right Hand of the King represented the king in his absence and was the second most powerful man. When holding meetings, the king would sit at the head of the table and the Right Hand of the King to the right of him. In today’s world, we may not hand out these titles but people who trust each other continue to sit together in meetings and the boss still sits in what I call the Boss Chair at the head of the table, while the person whose advice is valued most usually sits in a nearby chair. I refer to it as the Influence Chair.

As the Boss, you can subconsciously make someone more valued by offering the chair to your right if you are right handed or the chair to your left if you are left handed. You can also make the client feel in charge by offering the Boss Chair instead of sitting there yourself and even dominate peers by offering a chair next to you. The role of assigning seats puts you in a dominant position and understanding how hierarchy translates into seating charts gives you a headstart.

This article was first published on Entrepreneur.com

VPN : How to Watch J Sports Outside of Japan