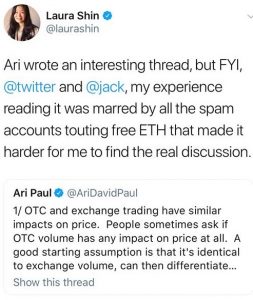 Fake ether token giveaways are clogging Twitter threads, and seemingly by the second. Targeting well-known ecosystem figures, doppelganger accounts are created, complete with matching avatars. A particularly active post can almost assuredly be counted on to receive seemingly organic calls for participation in free crypto programs hosted by the respective personality. And now they’re incorporating Google+ redirects. And it’s working. And Twitter seems to be either doing nothing about it or is just plain impotent.

Ari Paul, investor guru from Blocktower hedge fund fame, was on another multiple tweet philosophical lecture, spaced out and numbered. The topic was a meditation on over the counter and regular exchanges’ impacts on price. It proved so interesting, no personage less than Laura Shin, Forbes journalist, popular podcast host, and ecosystem gadfly attempted a read. She soon came up against what more and more Twitter users are facing: fairly elaborate ether (ETH) come-ons, fake giveaways using mirror’d accounts.

Ms. Shin’s trademark Valley Girl patois could almost be heard echoing through her corresponding response tweets of disgust and alarm: “Ari wrote an interesting thread, but FYI, @twitter and @jack, my experience reading it was marred by all the spam accounts touting free ETH that made it harder for me to find the real discussion.”

Just a few clicks later, and she discovered another awful truth: she’d been personally compromised. Someone with the account @XaedenJ was using Ms. Shin’s professional reputation and likeness to tacitly approve a 10,000 Ethereum giveaway, and it directs readers to a website asking for payment. The scam even went so far as to create a thread conversation about the giveaway, in effect dialoguing with itself. “If you’re late for this event,” the fake Laura Shin posted below the landing page advert in the thread, “you’ll get your investment back at once!”

A little more digging, and she found the offending scam post garnered a quick 28 likes, which were probably from bots designed for the very purpose. These could seem rather enticing to cryptocurrency noobs, and thus the problem. In utter exasperation, Ms. Shin, the real Ms. Shin, tweeted, “Someone please create a better Twitter. This is ridiculous.” At press time, the offending address, @XaedenJ, was scrubbed by Twitter, taken down permanently, and way too late.

Ms. Shin’s platform, her access to movers and shakers within the industry, made it easy for Twitter to recognize the problem and take immediate-ish action. But, again, it was too late. It went out there, and no doubt some were probably lured. It, of course, isn’t just Ms. Shin who is being hounded.

He was quick to differentiate scams related to Twitter, roughly 500 of that number derived from the social media site, of the overall thousands of ETH giveaway frauds cataloged. His calculus includes any “kind of scam, including phishing scams that have nothing to do with Twitter,” he typed.

It’s to the point where a tracking website exists to keep abreast of ETH scams as they happen, are discovered, and end. Appropriately titled Ethereum Scam Database, it’s maintained by My Crypto, and includes a Github reference along with detailed reporting instructions. The project is open source, however “All reports end up in a private Slack to protect people’s privacy. The reports can be read by all team members of [My Crypto] and they can decide whether the report makes it to the blacklist,” they explained. 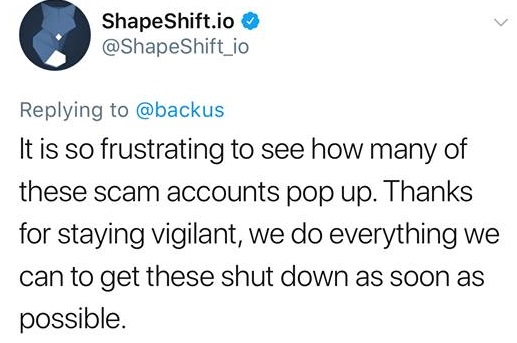 My Crypto recommends “Use cold storage – Buy a Ledger Nano S or a Trezor; Bookmark your crypto sites – Use those bookmarks and only those. Only send funds to trusted addresses – Double-check what address you’re sending ETH to. Look up the address at etherscan.io and check if there are bad reviews; Never trust any discord/slack/telegram/reddit message – Don’t ever fall for messages that say you can get free ETH or that a hack has occurred.”

Do you think such scams hurt the brands of Twitter and ETH? Let us know in the comments.

Verify and track bitcoin cash transactions on our BCH Block Explorer, the best of its kind anywhere in the world. Also, keep up with your holdings, BCH and other coins, on our market charts at Satoshi’s Pulse, another original and free service from Bitcoin.com.