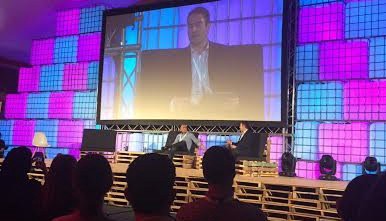 The headline story isn’t great. At 28%, the Middle East and North Africa has the highest level of youth unemployment in the world. Furthermore, the region needs to create approximately 100 million jobs in the next 10 years. Mission impossible?

Absolutely not. I recently had the great privilege of interviewing Fadi Ghandour, founder of Aramex, at the STEP Conference in Dubai, on the topics of entrepreneurship, scaling-up, and the employment challenge in the Middle East and North Africa region. The insights that I came away with are fascinating, and the international community, particularly investors, should take note. I would summarise our discussion by highlighting four points:

First, you can go a long way to solving the employment challenge by better integrating female talent in the work place. The IMF has found that increasing Female Labour Force Participation (FLFP) to the level of males in Egypt would increase Egypt’s GDP by a remarkable 34%. But, as Fadi remarked, increasing FLFP to the level of malesacross the whole MENA region could result in 58 million additional jobs! That’s already 60% of the target requirement over the next 10 years.

Second, the employment challenge can also be addressed through targeted public-private partnerships. It is often remarked that the education system in the region does not produce enough critical thinkers required for entrepreneurship. However, as Fadi reminded us, this is not a challenge unique to the Middle East and North Africa. One practical way governments can begin addressing this in schools, for instance, would be to introduce compulsory classes in English and coding, from an early age, to ensure proficiency at the time of graduation. However, the private sector can, and should, be an integral part of the effort to improve skills. They can do this by designing, and funding, post high-school and post-graduate level courses that teach skills specific to the respective industry vertical. A guaranteed job in that industry for successful graduates is another idea.

Growing the private sector will be a critical element in producing the required number of jobs, as well as providing governments with the increased funding they will need for services such as education and health care. In a region where the state remains the dominant employer, changing perceptions about the private sector is crucial, and one way to do that would be for companies to take a more ‘hands-on’ approach to improving skills.

Third, whichever way you look at it, entrepreneurship will be at the centre of job creation – and the MENA region has a lot of start-ups that are maturing rapidly. Just under two months ago, Talabat, the Kuwait based food delivery service, became the latest big exit, bought by Rocket Internet for $170 million. The region has now witnessed over 40 major exits in the past 15 years, including Yahoo!’s acquisition of Maktoob in 2009 for $164 million. This has led to a steep maturing of the VC and angel funding environment. Over the past 5 years alone, the average fund size has grown from $15 million to $45 million. Dubai is now awash with diverse investors, including global players such as Naspers, Tiger Global, Rocket Internet, 500 Startups; international institutions such as the IFC and EIB; as well as regional investors such as Beco Capital, Wamda Capital, MEVP, Silicon Badia, Leap ventures, iMena, MBC ventures and Mena Venture investments, to name but a few. Additionally, corporates, particularly in certain verticals (telcos such as Zain, Etisalat, Mobily from Saudi Arabia and STC Saudi have been especially active) have also set up venture arms. This has brought in over a billion dollars in new funding and investments into the region over the past two years.

Fourth, when it comes to scaling up in the region, geography matters. Examining success stories of companies that have done exactly that (Aramex, Maktoob, Talabat, Souq.com are prominent examples), we can learn some important lessons. They all adopted a “region first” approach. This means, they decided to stay local and focus only on the Middle East, rather than seeking expansion into more mature, international markets. According to Fadi, Souq.com is already the region’s first Unicorn ($1 billion valued companies). We can expect the number of Unicorns to rise substantially over the coming years. The secret? The founders of Souq.com were all previously involved with Maktoob. The Middle East is a rapidly maturing market. Like Silicon Valley, Dubai is discovering the benefits of increased “churning”: the ecosystem is breeding more start-ups, which in turn is breeding more and larger exits.

Investors should take note. The Middle East and North Africa is as much about great products, exciting start-ups, technology and first-rate talent, as it is about the often repeated news stories that flash across our screens every day. The region has a plethora of great entrepreneurs, great minds, and great startups to invest in. For investors worried about the risks of investing in this region, they needn’t be. In Dubai, they have the perfect “fund of funds”: investing here gets you exposure to some of the best the MENA region has to offer, accompanied by some of the world’s leading companies.

Focusing the international community on the region’s success stories has become an urgent imperative. Let’s change the narrative of the Middle East and North Africa.