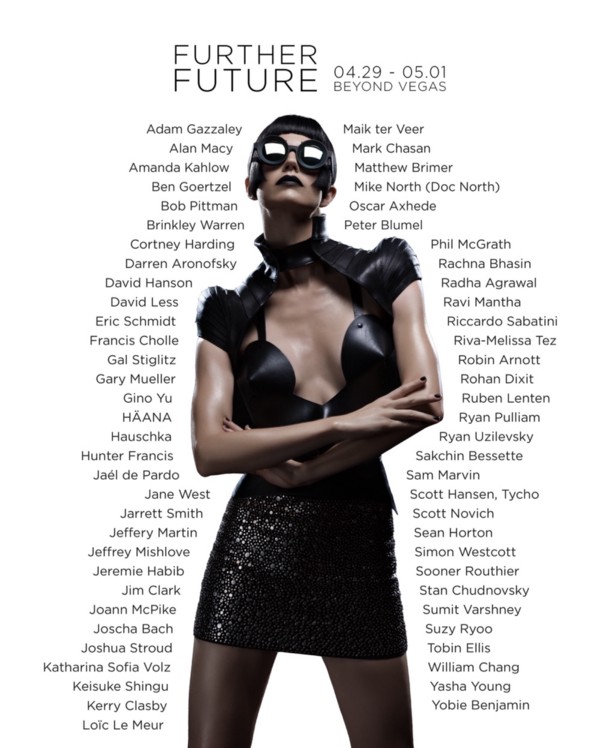 I love conferences. They can change your perspective on life and business. As Martin Thörnkvist brilliantly explained in this article, you should at least attend one (creative) conference per year:

In the stressed out working environment we all face it’s more important than ever to get our asses out of the office chair during work hours.

I’m really passionate about events that blend categories and genres, with the obsession of crafting memorable experiences for their attendees. I call them creative conferences because they are innovative in the way they connect art/performance and science/technology.

Many were created by music festivals. Think of SXSW, Sonar or Les Nuits Sonores’ European Lab, just to name a few. Others have their roots in technology and entrepreneurship like XOXO in Portland or TOA in Berlin.

These are my picks for the first semester of 2017.

Pause is definitively one of the hottest tickets in the conference circuit this year. A must-attend event for anyone interested in the alchemy between creativity, technology and business. If you’re building connections with Asia Pacific then it’s a no-brainer. Just buy your pass before they sell out.

Founded by George Hedon seven years ago, Pause brings together everything you can expect from a festival of ideas: inspiring talks, educational workshops, hands-on experiences, live entertainment and networking opportunities. All of that in the beautiful Melbourne, the most liveable city in the world.

Deeper connections between creatives and others didn’t happen in the office. Instead it’s all about what happens once you step outside — George Hedon

Pause offers a 3-day conference program with a split between creative, tech and business days so it’s easy for you to pick just the right content. Or attend all of them and experience the convergence of ideas at its best. You can also participate in dozens of satellite events.

The theme this year is “Different Perspective” and will present speakers from the NASA, Magic Leap, Etsy, frog, Lucasfilm and Tesla among others. There is also a Startup Expo area.

The program is tied to a smart branding and an outstanding work of art which isn’t surprising given the founder’s background in advertising. Check out Motion Response to get a better sense of what Pause is up to when it comes to design.

Someone said it’s like TED, Burning Man and SXSW all in one. Do you want to miss it?

Celebrating its 6th edition this year, Resonate is on my radar since its launch. Unfortunately, I’ve never been able to attend this unique festival where artists explore their relationship with technology in an effort to create new cultural narratives beyond mainstream media.

Obviously, the fact that Resonate is organized in Belgrade helps a lot. The city is already highlighted within the creative industries with initiatives like Mikser Festival or Nova Iskra.

While the Balkan capital still resists to the western empire, it’s now part of the global entrepreneurial ecosystem with incubators (Starlabs) and Tech events (Voxxed Days), building bridges with other regional hubs like Vienna or Sofia.

The lineup is always a breath of fresh air with big names from the European art underground, squat artists and rebel thinkers. Those luminaries come together for a program of workshops and original formats. There’s no room for pitches as the curators of the conference carefully pick the right experts and practitioners to execute their vision.

This year, you will be able to learn from and discuss with Jeremy Bailey, Alan Butler or Julie Freeman. Art installations, side events and live music program also add up to the experience and make it worth to take a night train from Budapest and spend a week there.

You’ll learn from underdogs and trendsetters like never before. No bullshit. No corporate compromise.

Founded by Andres Colmenares & Lucy Esperanza Rojas, Internet Age Media is a platform that brings together digital artists and cultural heretics in the magnificent capital of Catalunya for a three-day conference centered on the theme of “The Renaissance of Utopias”.

It is somehow surprising to see that most industry events dedicated to the digital economy don’t really analyse what is the fabric of Internet: its memes and cultural producers. Startups and unicorns would not exist without those who write bits and design pixels.

We all love TED, but somehow this was really different. It was almost an emerging TED.

As a matter of fact, the conference first popped up in my radar when Kai Brach spoke there in April 2015. If you’re able to get the founder of Offscreen Magazine to fly from Australia for your event, you must be doing something well.

The conference is focused on diverse topics such as the future of work, advertising and politics, and curates speakers like Zygmunt Bauman, Bruce Sterling and Jasmina Tesanovic.

Their newsletter is a piece of art on its own if you’re literate in digital anthropology. Probably still very niche, this intellectual approach is a breath of fresh air in our times of content snacking and salesy communication.

Founded in 2015 by Burning Man veterans Jason Swamy and Robert Scott, Further Future is a new breed of transformational festival with wellness, meditation, food and fun at the core of its value proposition.

More than 60 acts performed in the second edition with Four Tet, Caribou and Nicolas Jaar headlining. It’s like Coachella or Electric Daisy Festival for just 5,000 attendees. In the middle of the Moapa River Indian Reservation, less than an hour outside Las Vegas.

Everything is curated, from the program and the facilities to the guest list. Mixing work and play, the festival makes it easy for its selected group of attendees to create lasting bonds, experience life-changing moments and inspire movements which ultimately transact into business.

With its amazing lineup of performers and speakers, and its steampunk futurist aesthetic, Further Future is a dream come true for the Silicon Valley elite.

Also founded in 2015, Symposium Stockholm is probably the most notable effort from music entrepreneurs to put their city on the map ever.

Created by Ash Pournouri (At Night Management) and Daniel Ek (Spotify), the festival of ideas is showcasing Stockholm as the creative capital of the world. This week of intimate and open forums and concerts includes Summerburst Festival, Denniz Pop Awards and Polar Music Prize.

The program culminates with Brilliant Minds, an invitation-only thought leadership summit gathering over 300 executives from the fields of entertainment, technology, fashion and politics.

Under the leadership of its CEO Natalia Brzezinski, Symposium Stockholm is fast becoming one of the most coveted conferences in the planet and the first “borderless digital embassy”. The long-term vision of Brilliant Minds is to create a new generation version of Nelson Mandela’s NGO, The Elders, engaging the young tech leaders civically and in turn weaving a new language that combines policy, geopolitics, tech and pop culture.

The future will be shaped by founders, it already is, we just need to help people realize and leverage that — Natalia Brzezinski

The theme in 2017 will be Numanity, exploring the story and values that will drive the future of how humans will relate to technology and how technology will change the definition of humanity. Already confirmed for the third edition are Mario Batali, Gunhild Stordalen, Robyn, Leila Janah and Olafur Eliasson, just to name a few.

I’m involved in the program so I won’t oversell Symposium. There must be an answer to SXSW in Europe and Stockholm could be the one.

The Swedish capital is already a credible response to Silicon Valley and Hollywood on its own with the highest number of technology ventures and music GDP per capita in the world after the US.

If you don’t believe me, check out the podcast series from last year’s conference featuring Quincy Jones, Jimmy Wales and Joanna Shields:

How to handle career obstacles and objections at work