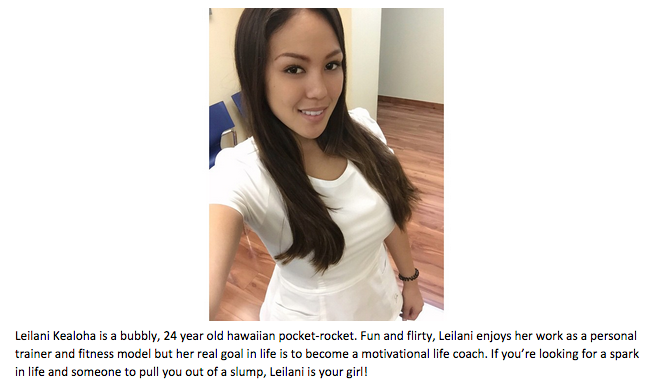 A lot of people are interested in writing scripts for Girlfriend Plus. It’s not that hard, but there’s a few things you need to know.

NPC — Non Player Character, the girlfriend or the boyfriend. The player receives messages from the NPC.

Player — The person playing Girlfriend Plus. Player messages are messages that the player can choose from for a response.

The scripts for Girlfriend Plus are pretty long, each one is about fifteen thousand words. It takes a while to create one script. We review all the scripts, and becasue of this we want to read them as you write them. We also want to add in comments and suggest edits. So Google Drive is a must.

Do not be tempted to write in Microsoft Word and then upload it to Google Drive. If you do that, we lose all the commenting/editing functinality.

The script starts off with your character’s biography, this text is shown in the purchase screens inside Girlfriend Plus. It also includes the initial profile picture you would like to use.

A message block starts off with a message from an NPC, followed by messages the player can choose to select. These messages can branch out further. We branch out to at most three levels.

State the message number, then include the text “PICTURE MESSAGE”, then import in the image you want to use. Picture messages are usually followed by a message block related to the picture.

Write the message number, then include the text “AUDIO MESSAGE”. You then write what the character says in the voice message, include the tone and any sound effects you would like included. We pass this text over to our voice actors and they’ll use this to figure out how to act out the audio message.

Write the text CHANGE PROFILE PICTURE and include the picture you want it to be changed to. Profile Pictures must be square images like 640×640 and they cannot have borders.

We use pipe character to break up longer messages into multiple messages.

The above text will break out into four separate messages.

Pipes are use to break out Player Messages too, but the first message appears as an option to the player when they are selecting responses, and the following messages come in automatically. So you need to craft the messages so that the first message makes sense on it’s own. In the above example

Every four messages or so, it’s good to add in a delay ranging from 15 minutes to 2 hours. We don’t want any delays larger than two hours. We do this to keep things realistic and build up anticipation.

These are player messages that don’t explicitly say what the player is going to write, but gives them an idea of what to expect. In the above example the player will see the first mesasgage “(Flirt with her)”. When they select that option, the text “(Flirt With Her)” will not be written out as a message, instead the following message “You in that bikini yet? ;)” will be written.

If there’s a section you’re worried could be too risque/offensive, select it and add in a comment so I can help you decide. I will read the entire script, but it’s best to point these sections out to me.

A Snap to Remember