Home Digital Marketing Hip-Hop Duo Run The Jewels Are Much Better At Online Marketing Than... 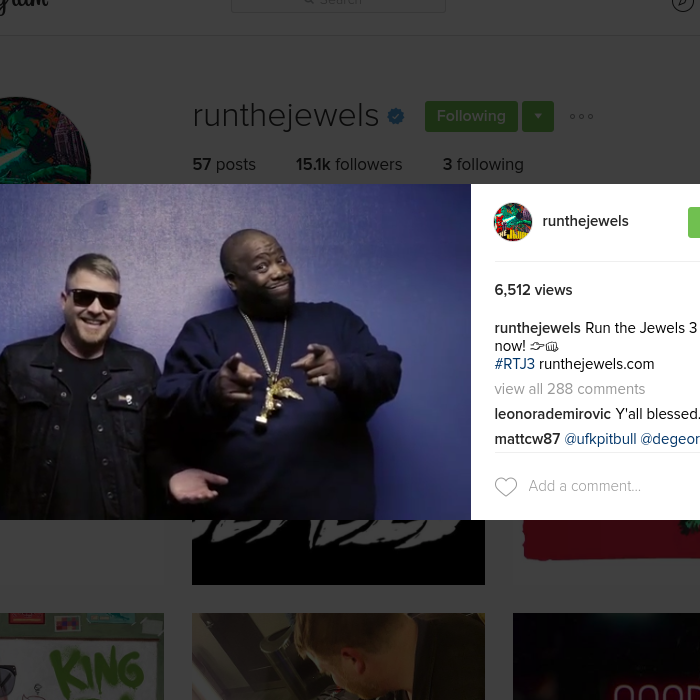 If you’re a hip-hop head, you’re probably just as fired up as me today — Run The Jewels have just dropped a new album, 2 years after RTJ2. The way they did it shines as yet another example of great artists that are schooling us on real online marketing.

“When’s RTJ going to drop something new?!?!” — I found myself wondering just a few days ago. Much to my excitement, I woke up to social media being abuzz with the news that EL-P and Killer Mike have, indeed, just dropped what will probably be the dopest end-of-the-year gift I’ve ever received (let me know in the comments if you feel the same!).

The way they dropped RTJ3 is one of the best examples of online marketing that I’ve ever seen — bold, direct, quick. Screw jibs, jabs and hooks that members of the GV church believe in — this is a 1000-tonne gold boulder dropped through the roof right into your room, without warning.

I’m a bit too excited, but let me elaborate.

I wasn’t even following RTJ’s Instagram, not sure I follow their FB profile (correction: I do!). You know why? I already “Like” 886 pages on FB. Following new ones means that I’m only going to be even more buried by a constant stream of information that isn’t always relevant to my life (well… it rarely is, to be honest).

Suppose that all of them are pages that offer some sort of value — informational, artistic, or just fun (I wouldn’t have started following them otherwise). Even though I’m an FB addict, I still fail to stay up-to-date with all the news that I’d like to keep up with.

Do you know how much content is published on Facebook everyday? Every 60 seconds on Facebook: 510 comments are posted, 293,000 statuses are updated, and 136,000 photos are uploaded. [source]

So much content is being published on a daily basis, in fact, that it’s actually harder to stay-up-to-date with the pages that you really want (or need) information from.

But I know I can rely on something — social media buzz. Whenever something really important happens, like the drop of one of the most anticipated albums in music, I find out thanks to others that share that information.

What does this lead to? Well, I don’t know about you, but lately I haven’t given the slightest of f**ks about any marketing campaigns that were aimed at making me interested in… waiting for something.

I’m just interested in you giving me something of value — that’s just how it is! And if you’re a marketer, or anyone else trying to build an audience online, you have to remember a very simple, yet powerful truth :

Building anticipation is a waste of online space, that could be filled with valuable content instead. It makes things harder for all of us that are on social media a lot. Just because people think high of themselves, they expect you to be interested in everything that they’re doing.

But if you’re a musician then I don’t really want to know what your everyday life looks like, or constantly be reminded that you’re working on something. I want to know when singles and albums drop, and about gigs that you’re gonna play anywhere close to where I live.

Just to give another example, same goes for technological startups. Don’t expect anyone to care that you’re building an app — everyone is building an app these days. Just create something and drop it. If it really is valuable, people will get interested and promote you online by themselves.

What did Run The Jewels do?

When you have a proven track record of creating great music like RTJ have, then people will only expect better from you in the future.

That’s why the single most important thing in marketing is the quality of your product. Confused?

Answer me this — shouldn’t marketing be about bringing great stuff to all people that need it, as opposed to trying to manipulate people into buying useless bull***t?

To me that isn’t even a question. There’s no point in doing any form of marketing if you’re offering something wack. Nobody will care anyways — you’re trying to push a piece of crap and break through 421,920,000 daily status updates on FB alone. Or 8,796 pics shared on Snapchat every second [source].

Killer Mike and El-P focus on what they do best — creating fresh, honest and unique tracks.

Their IG updates are irregular, their Twitter page is fueled largely by retweets. The RTJ FB page is full of good content and gig updates. Their Tumblr blog seems to be dead (probably missed their target a bit there, I’ve never seen much hip-hop on Tumlbr).

RTJ3 dropped with just a few updates on social media (an FB note, an IG video and retweets of the same content on Twitter), and a video of their appearance in Portlandia.

Same video welcomes you when you visit the cool-looking, simplistic RTJ website. Below the video is a sign-up bar that allows you to quickly download a .zip file with the complete album, for free (with a small side-link to stream and pre-order the album). Plus 2 links to pre-order and buy merch, and one link to buy tickets for their upcoming tour.

All in all, you get an amazing album from some of the most influential musicians of the 21st century for free. Nobody is forcing you to pull out your wallet, and you have a choice to support RTJ by paying for the album or buying merch.

Create great stuff and be yourself

Thanks to staying true to who they are and focusing on the quality of their end product, Run The Jewels have been building a global online audience since 2013 simply through creating great stuff and giving their fans a lot of value.

The way they dropped RTJ3 reminds me a bit of how Louis CK dropped his self-produced tv series Horace & Pete. His non-marketing marketing strategy seems to be very similar, but even less sales-y (and here you probably thought that it’s not possible!).

But that’s a great subject for another article. For now I want you to remember this — if you’re not giving people RTJ-class music, content or products, then please don’t worry about marketing. Worry about creating something of great quality first.

If quality is on your side and you don’t sacrifice your integrity to earn more cash, then you might find that your audience will promote you online by themselves.

PS. I’m finishing this article on the 5th repeat-loop of RTJ3. If you’re a true hip-hop fan, and you don’t like how the world looks like at the end of 2016 — I can’t recommend this album more, just download this truthful thing of genius and listen to it. Oh, and if Run The Jewels happen to read this article — guys, could you include PayPal (or sth similar) as a way to pay for your stuff online? Would make it much easier for at least one, Polish RTJ fan to buy from your store — I really don’t like credit cards.