Home Digital Marketing How a Florist Shop Turned a Boy Into an Advertising Genius. 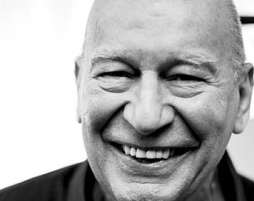 Tommy Hilfiger was on Charlie Rose, describing the turning point that made him a household name. “George Lois,” Hillfinger said. “We were nobody’s. You couldn’t compare our sales to Calvin Kline or Yves Saint Laurent. George was the one who changed all that. His work is absolute genius.”

“What did he do?” Charlie asked him.

“He proposed a campaign comparing us to those guys. It was completely audacious at the time, but it worked. Our sales grew like crazy.”

For those of you not familiar with George Lois (and you should be if you’re in advertising), he was an art director at Doyle Dane Bernbach during the Creative Revolution. Like his contemporaries, including Bob Gage, Julian Koenig and Helmet Krone, Lois believed in the sell. What sold? A thought, a visual, an idea that people hadn’t seen before. It had to be something so different, so outrageously unique, you couldn’t help noticing it.

That became a pattern with Lois: Nobody pays attention unless they’re a little bit shocked. Throughout his career, especially at his own agency, Papert, Koenig and Lois, Lois found ways to raise interest — and eyebrows.

So where does a genius like George Lois come from? He started out working at his father’s florist shop. When he wasn’t making deliveries, he’d watch his father. Any time a customer came in with an order, Lois’s father listened intently. Then he did whatever he wanted.

To a young Lois, that was audacious, but he learned later his father was always listening. Instead of just giving back what the customer wanted, he was essentially giving customers what they needed.

As Lois described in his book “George, Be Careful,” there’s always “want and need.” Listen hard enough and you’ll figure out the difference. Like I said, Lois’s father wasn’t ignoring his customer’s request, he was distilling it.

Simply going back with what a client wants is only half the job. This is the flaw with advertising today. It smacks of feeding back the original request.

Here’s an example: One of the first clients at Papert, Koenig and Lois was Haloid-Xerox. After getting the client to dispense with the first part of their name, they urged Xerox to try television. To show how simple it was to operate a copier, Lois and Koenig used a little girl. This didn’t sit well with network officials. They didn’t believe a little girl could make copies that easily. So they requested a revision. In other words, the commercial got dumped.

When a commercial gets dumped, agencies go into panic mode. The next thing you hear is “Get a spokesman. Show the features. No more little girls. No more funny stuff. The client’s really pissed.”

What did Lois do with Xerox? He replaced the little girl with a chimpanzee, making the simplicity of the copier irrefutable. “In fact,” he later recalled, “the chimpanzee demonstration was more effective than the little girl. The chimp was a better actor.”

In an article later in life, Lois said that we must “slay the dragons of mediocrity.” By that point, Papert, Koenig, Lois was gone, as was Bill Bernbach and a slew of other geniuses. In their wake, other great creatives came along, some forming agencies like Tom McGilligott of McGilligott, Fallon and Rice, and David Abbott of Abbott, Mead, Vickers BBDO.

They all slew dragons, but Lois did it more than most. In going back over his work, even his early stuff refused to simply be advertising. Take the ad he and Julian Koenig did for Harvey Probber, a furniture manufacturer. It showed a chair with a matchbook cover under one leg. The ad said: “If your Harvey Probber chair wobbles, straighten your floor.”

In some of his more recent articles, Lois bemoaned the state of advertising. He saw the “dragons of mediocrity” crawling out of their caves, breathing political correctness. He’s right. We’ve allowed mediocrity and correctness to blow flames on our ideas, leaving them smoking, idle pieces of client requests.

Someone wrote me, asking if schools were to blame. I said “Schools don’t send out explorers anymore, they send out duplicates.” In hindsight, I’ve revised my thinking somewhat. I don’t blame schools. Afterall, Lois didn’t learn “want and need” from schools. He learned it in his father’s flower shop. I learned it selling shoes before university.

Those menial jobs laid the foundation for our advertising. We met people, we listened, and like George Lois’s father, we distilled.

If young copywriters and art directors are going to change advertising — to create another Creative Revolution — distilling will be their greatest asset. It isn’t a brief. It isn’t what the client said or requested. It’s understanding “need” and giving back something nobody’s seen before. For those who say “It’s all been done,” they were saying the same thing in the fifties.

Sure, people believed it back then, and the fifties produced absolutely awful advertising. But individuals like Bernbach, Lois, Koenig, Gage, Krone, Green and others didn’t. They thumbed their noses at conventional wisdom. They threw out the rules. That’s all the Creative Revolution of the 60s was.

It’s time young advertising people did the same. Otherwise, those “dragons of mediocrity” will continue spewing flames and we’ll be left with nothing but the ordinary and politically correct.

What do you think? Can advertising return to some form of greatness? Let me know at: rcormack@rogers.com

Robert Cormack is a freelance copywriter, novelist and blogger. His first novel: “You Can Lead a Horse to Water (But You Can’t Make It Scuba Dive)” is available online and at most major bookstores. Check out Yucca Publishing or Skyhorse Press for more details (you can also buy my book from them).

7 Steps to a Successful Product or Service Launch

From Trash to Values