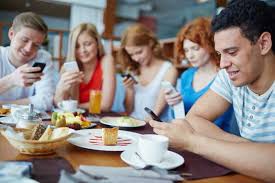 In the world we live in today, social media has drastically changed generation after generation due to the growing and fast paced technological innovations. From the advent of the internet, or the information Superhighway, social media has enabled today’s society to communicate, share information, do commerce, and even go to war globally. No longer are you bound by mail, telephone, radio, or television, today we can reach millions of people with just a few computer strokes. Social media, as we know it today, has changed society, and will keep changing the world we live in well into the future. Although social media has brought about great benefits, it is a double-edged sword, depending on how it is being used, it could either benefit or harm society. It’s power can be toxic and addictive. Health issues are forming due to its excessive use, which mostly affect teenagers. Another drawback of social media is the accurate information being shared in this medium. The negative effect is clear, there is no way to tell if the information being shared is accurate. However, not many people question the truthfulness of the information posted on the internet. Even worse, they take this information as real, and never challenge the merits of social media.

Users on social media are held accountable for their actions. Sites such as Facebook, Twitter, Snapchat, and Instagram are commonly used in this generation, and many use it. “In addition, students can be motivated by many factors to engage in social media, such as academic assistance, personal interest, or social need.”(Lu, Jingyan) People should take precaution before posting or “tweeting” anything that people would take offense to. During classes, students should be fully engaged in their class lectures, but instead their minds are wandering on how many likes their instagram post got from the party last night, or having the constant urge to check their news feeds fearing that they’ll miss something important. Some don’t even have the decency to lift their heads up to engage in a conversation with their family. If you think about it, realize how much time you waste on staring at a small screen. I’m a culprit myself. Waking up in the morning, the first thing I do is check my phone to see if I have received any notifications from snapchat or any new followers on Instagram. Just recently I went to the dentist and my hygienist always talks about her 11 and 15 year old girls. She told me, “social media is their reality”, this statement couldn’t be any more accurate. Young women view themselves differently because of the so called “filters” from Snapchat and Instagram, thinking they have to look perfect for every post in order to get “likes”. They are masking the inferiority in other areas of their lives by constantly uploading selfies and updating statuses.Little things such as watching the sunset seem to be less enjoyable now if you’re trying to capture every moment rather than living in it.

Social media will affect a student’s everyday life if abused, it can significantly lower their grades due to the psychological problems they are going through such as ADHD, anxiety, depression, etc. This is targeted mainly towards young adolescents that are questioning their self-image and self-worth. People could be easily deceived online, where rumours can start and not know how to stand up for themselves which is the leading cause of cyberbullying. “The enormity of the online world means that one image sent via an Internet chatroom can be viewed literally millions of times around the world in a very short time, and electronically forwarded content is hard to control.”(Rogers, Vanessa) Social networking allowed people to have hundreds or even thousands of friends, without even knowing their names or see their faces, leaving predators vulnerable.

Despite the many negative implications social media have on society, there are a multitude of positive effects social media can have. “57 percent of all American adults are using Facebook. If you think about that statistic in your own community, that means that over half of your service area is on Facebook.”(King, David Lee) Starting off with Facebook, this particular site has the most users on it and you can do basically anything on it when it comes to socializing. People mainly use this to create groups when organizing or planning an upcoming event, and it is easily detected if they can attend or not. You can find out if someone is in a relationship or single by just a click on their account. Besides Facebook, certain networking sites also allow you to talk to friends from any part of the world. Depending on how you use social networking sites, it could keep you fully connected to people and communities all over the world.

Lastly, there has been a steady rise in companies partnering with social media platforms to help propel their company to the next level. What is shown on the right hand side of Facebook? Advertisements. Especially when you scroll down Instagram and Twitter, advertisements pop up every now and then. “A significant 86% of marketers said that social media was important to their businesses”(Angelova) Without these advertisements small companies would be struggling to sell their products, since no one would know about them. Online shopping became a big hit and it is very convenient for the consumer. In addition, consumers can subscribe online to a company they often visit from their emails, making it a tool to reach out to customers that you’re coming out with new products. However, it can all go downhill, it only takes one customer to receive a product they are not satisfied with. If they post about the product on social media, it has the potential to eventually ruin the company’s reputation. “These days, one witty tweet, one clever blog post, one devastating video — forwarded to hundreds of friends at the click of a mouse can snowball and destroy a product or damage a company’s share price” (Weber, 2010).

“Ultimately, the way you counteract this is by raising your self-awareness. It’s not about don’t spend time on Facebook, but just be aware of what it might be doing to you.”(Wilcox, K) In conclusion, young adults and teenagers must realize that they have the power to influence the world around them with social media in their hands. Social media is a powerful tool that can affect other’s lives. If they know about their own potential, they have the choice to do the right things.