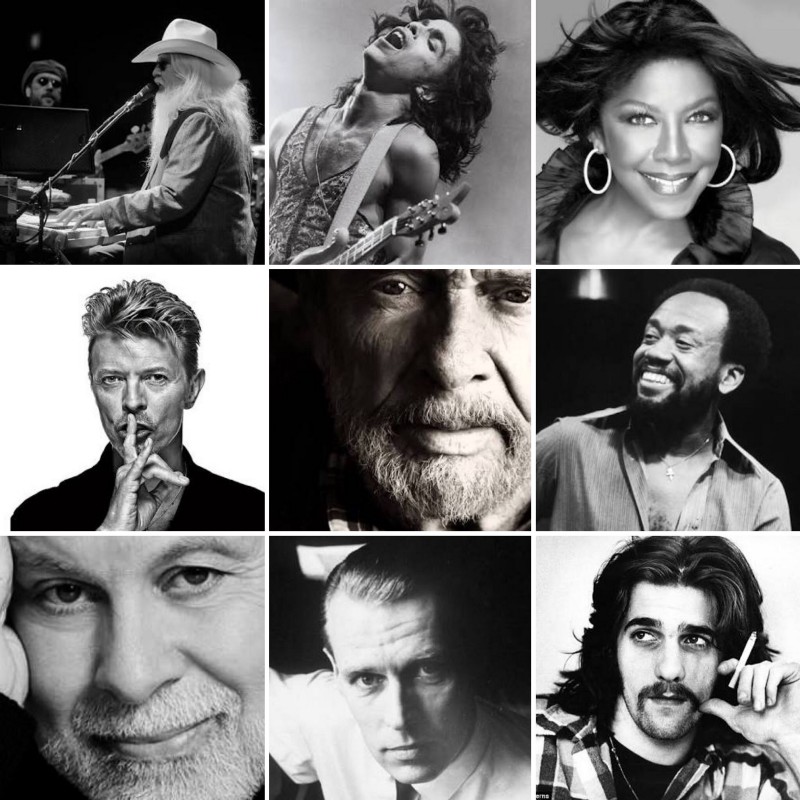 2016 will go down in history as one of the worst years in music. Once all the dust has settled on this year, people will look back and acknowledge the great losses we, as a music industry, have suffered.

In any given year there are many great legends that pass away, but this year has been an exception: not only have we lost a few stars, we have lost some of the most historically significant stars of the rock era, artists/creatives who have made major contributions in their sphere of the music world.

In this article I will highlight 12 great legends we have lost this year:

Prince has always been one of my heroes. Not only was he a phenomenal musician, who mastered over a dozen instruments in his lifetime, he also wrote over 2000 songs and produced works for various artists. He was a prolific musician, composer and producer. His biggest contribution to the music industry was probably making Funk music something that accessible to a greater audience. Prince was able to take a very niche genre of music and make it something that people wanted to buy and listen to and something to which they could relate. He was an absolute legend and he changed the face of the music industry.

Although David Bowie was an exceptional showman, he was an excruciatingly private individual and a hard worker. He went to the grave without whining about his illness or asking for special favors. He recorded til the last minute. David Bowie brought the glam into music and was one of the first artists in history to focus on the show and developing his showmanship to such a level that it was emulated by many artists, including people like Prince. David Bowie was one of the first, great, progressive/glam artists.

My year started off with the bad news that one of my favorite vocalists had passed away. This woman inspired my singing, when I was being formally trained as a vocalist. Although she was born to an exceptionally famous dad, Nat King Cole, she carved her own path. She made Jazz cool again, after winning 6 Grammy Awards for her album Unforgettable…With Love, she opened the doors for artists like Norah Jones, Katie Melua, Michael Bublé, Diana Krall and Jamie Cullum. Jazz became once more a bankable commodity. With Natalie Cole died a music dynasty that last over 82 years.

Unlike with Natalie Cole, Frank Sinatra jr never really came from under his father’s shadow. Frank Sinatra jr went on to become a very successful conductor, composer as well as singer. In his lifetime he released 7 studio albums and toured prolifically: touring in 40 of the major US states. Incidentally he passed away of a cardiac arrest whilst on tour.

Sir George Martin was and is one of my all-time favorite producers. He was the man responsible for creating the sound of the most successful bands of all time: The Beatles. Many considered him the 5th Beatle because of his invaluable musical and audio contribution to the band. He was responsible for pushing production forward and being one of the great production innovators. He was responsible for perfecting the garage sound created by the Beatles and then taking it up a level and being one of the mavericks of Progressive Rock on albums he produced for the Beatles: Rubber Soul, Revolver and Sgt Pepper’s Lonely Heart Club Band. These sounds were envied by his contemporaries: The Rolling Stones and Brian Wilson of The Beach Boys.

René was a man that took a chance on a young girl, who went on to become one of the biggest selling female recording artists of all time. Although he struggled with a gambling addiction, he mortgaged his house in order to bankroll Celine Dion’s first album, believing that her talent would conquer the world, and that is exactly what she did: initially charming her French Canadian nationals, then the French and finally conquering the English world. He is a music icon that will be sorely missed.

Prince Be was one of my favorite musicians of the 1990s. He was the lead singer of the band PM Dawn. The band blended Hip-Hop, R&B and Pop to create a new R&B sound. The band composed some amazing hits and released some exceptional albums for about 10 years and then disappeared from mainstream limelight. I will miss Prince Be’s exceptionally velvety voice.

Maurice White was the lead singer of one of the Funk world’s most influential and critically acclaimed bands: Earth, Wind And Fire. The band released over 21 studio albums and 62 singles between 1971–2014. Maurice was an understated legend who achieved much in his career and helped open up the door for artist’s like Prince, D’Angelo, Terence Trent D’Arby and even Lenny Lravitz.

Merle Haggard was a country music innovator and maverick. In the 1960s, the country world was dominated by the Nashville machine, people felt that Country had lost its soul. At that stage Country music was being made according to a formula. There was a breakaway movement, that migrated to Texas and was led by Johnny Cash, Willie Nelson, Merle Haggard, Kris Kristofferson, Waylon Jennings. This movement was known as the Outlaw Country movement and aimed to bring country music back to its original roots. That is exactly what it achieved and Merle was one of the leaders of the pack.

Leon Russell was a prolific musician, producer and songwriter, having collaborated with some of the biggest artists in the music industry. He started his career as a session pianist in The Beach Boys. He produced works for Bob Dylan, Frank Sinatra, The Rolling Stones, Ike and Tina Turner and Elton John to mention but a few. Elton John even went on to assert the fact that he was highly influenced by the Folk musician’s piano playing at the beginning of his career. He was a Folk/Country music icon and legend.

Glenn Frey was the lead singer of the iconic band, The Eagles. As a member of the band, him and Don Henley wrote some of the band’s biggest songs. Not only was he a vocalist, he was also a multi-instrumentalist, playing the piano, guitar and keyboards. He won 5 Grammy Awards as part of the Eagles and was later inducted into the Rock ‘n Roll Hall Of Fame as part of the band. He eventually launched a solo career and had minor success on his own.

Louis J Pearlman was a highly despised character in the music industry and landed up dying in prison after being convicted for running a Ponzi scheme. He is related to Art Garfunkel (cousins). He was inspired by the success of the New Kids On The Block and established his own record company to discover young talent. He discovered The Backstreet Boys, *NSYNC, LFO, O-Town, Take 5 and Innosence (an all-girl group that contained amongst its members Britney Spears). All this success was eroded once the bands starting suing him for embezzling their monies. Nonetheless he was responsible for exposing us to a number of exceptional acts in his career.

Mandoza was a South African music icon. He was one of the innovators of Kwaito music in South Africa (an urban brand of music in which rhymed lyrics were included over composed beats) and attained widespread success amongst people from all racial and cultural backgrounds in the country. His success motivated many young people to pursue a career in the music industry. He was a beacon of light for many and performed up to his last days. He will be sorely missed as a legend and icon in the South African music scene.

All 12 of these creatives contributed so much to the music industry and they will be sorely missed. But when one doors closes another opens and new opportunities are made available for a whole new generation of artists. We will, however, never forget the lessons taught to us, by this set of legends. RIP…

why I’m voting for my father