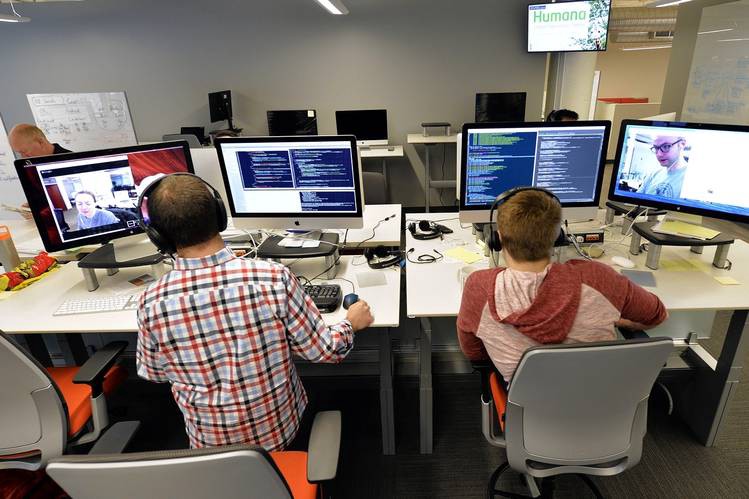 How different teams make the leap

While agile development has a clear set of procedures and strategies (think: standups, iterations, continuous delivery, etc.), it’s not exactly a one-size-fits-all deal. No process ever is. This is a truism we’ve seen repeated time and again as we’ve talked to various customers over the years to get a sense of their mindset and approach. For example, a small startup will approach agile software development differently than an enterprise business of 900 employees; a team with agile experience will approach a new project differently than a team just getting their feet wet with agile. And an enterprise trying to shift gears to become agile after decades of experience in a land of waterfalls? That’s another scenario entirely with a unique set of hoops to jump through.

Humana falls squarely into this last category. Though they’ve been successful transitioning to an agile approach, it hasn’t always been a easy lift. “One could say we were agile to some degree, but you’re only as agile as the organization around these teams is,” says Antonio Melo, of Humana’s Digital Experience Center. “Traditionally at Humana, there are departments for each asset you need and you create tickets to communicate with them, and then the speed with which they deliver you what you need to do your job varies anywhere from weeks to months to perhaps longer. That’s the area where the enterprise really needs continued focus.”

As is commonly the case, there can be entrenched resistance to new workflows and mentalities, and a broad fear to jump into the void. But, Melo says, that shouldn’t be a reason to be discouraged or move on. “Do not allow the series of unanswerable questions and the face of the unknown or the fear that results from that to become obstacles or justification for you not to get started. Start small, but start today. Simply based on where you begin and what your focus is, you will uncover the relevant questions and quickly answer them in virtue of your work.”

At Off-Grid Electric, Chief Information/Product Officer Thor Muller noticed a similar dynamic when the agile mindset was introduced to his solar-power startup: fear of uncertainty. “There’s always an issue with business people who have a deadline they want you to hit, to which I always say, ‘Have you ever renovated a house?’ I walk them through the uncertainty principle and whether or not they want to be lied to. They always get that, but when it comes down to it, they want a timeline, they want commitments, and I want commitments, too, frankly. I want my team to aim for something and do what it takes to get there, but understand there are tradeoffs along the way. Something’s got to give if you discover that, ‘Oh, this is a lot more work,’ which you usually do.”

Over at Notion, which makes an analytics dashboard, co-founder and CPO Kevin Steigerwald cautions about a similar reluctance, which combines fear with some level of intimidation. “I think some people will get too hung up on process and too hung up on those words, and if you try to do something that isn’t agile, someone will say, ‘Well that’s not agile, we’re not going to do it that way.’ And it creates this road block.”

For a new startup like TINT, the challenges are no less substantial, though notably different. The social media content aggregator went through a period of trial and error before landing on agile. “There were some transition periods,” says CTO Nikhil Aitharaju. “Initially we did product planning as a team. Last year, all of us would sit together and do it. That wasn’t scaleable, though, so we divided into three different teams. That didn’t work right away: people had their own deadlines and processes, and it wasn’t going well. I came up with a proposal to try agile, so we would actually do iteration planning, product planning, and sit together and assign points to stories, so that it’d be more accountable. It slowly evolved, and we learned from our mistakes.”

In the early going, at least, it seems to be have been a good choice for this team. “We’ve been trying this out for the last two months. Not pairing — we were doing that already — but the whole process around agile planning is something that I introduced. I think so far we’ve been planning well ahead of the time instead of planning for the next week. We’re more prepared; every team is aligned about when things are going to be out. We still have challenges in estimating — we’re trying to get better at it.

Over at the small nonprofit Whole Whale, becoming agile was a no-brainer for CEO George Weiner. “I implemented that because it was the only thing that makes sense,” Weiner says. “The waterfall, data-driven development usually ends in tears. If you think about a product as more iterative, it is just a better approach overall. So internally, we divide up in sprints, and we’re on a two-week sprint cycle. We do that for both soft and technical tasks. Agile is the only thing that makes sense in my world. We’re pretty manic about it internally, in terms of what the client sees.”

Your agile maniacism may vary, of course. But as long as your team is willing to get there, the path you follow to get agile isn’t all that important. After all, the most crucial piece of advice we’ve gotten from the teams with spoken with is: don’t be too afraid of the unknown or too beholden to the rules. In other words, if you can roll with the punches, and if you want a team that operates flexibly, nimbly, and predictably, you should give agile a spin.

This article is part of Built to Adapt, a publication by Pivotal that shares stories and insights on how software is changing the way businesses are built.

VPN : How to Get Mexican IP Address Abroad?