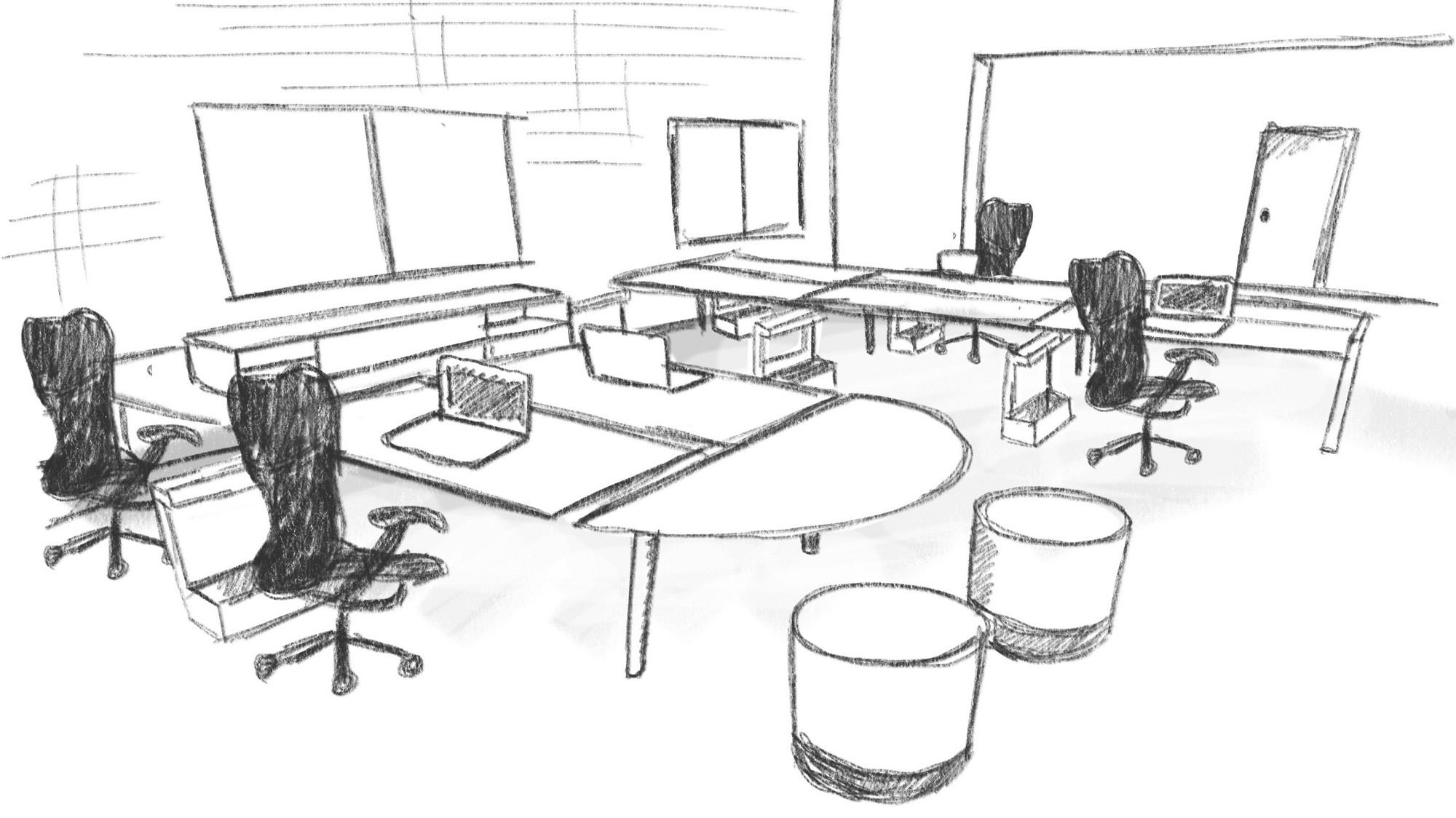 Before going crazy furniture shopping, I sat down with the dev team (without Jack, who has his own thoughts about what developers need) and asked them what they needed, and, more importantly, wanted out of the space.

Turns out, not much. None of them were interested in standing options. Storage isn’t much of a concern. And, much to my surprise, none of them really care about privacy, provided they have a place to retreat to occasionally. And, for the most part, they all generally dig the “sit around a big table” vibe that has been part of our culture since the beginning.

Our current tables are all home made and of varying quality. While they have gotten the job done, the main production bench is built into the wall and won’t work in the new space, so… time to go table shopping.

We considered several options, in order of expense.

DIY Tables.
I sit at a door desk at home. I love it. In fact, I even found the door in the garbage behind an old apartment. It’s seriously great! And part of me — the cheap, utility driven part- still thinks “Screw it, order a dozen solid wood doors and be done with– they even have the cable hole pre-punched out!” But we also need something big for conferencing and whatnot, and while I’m somewhat handy, I am not a carpenter and my carpenter buddies are no longer around and I don’t really feel like biting this off myself.

IKEA BEKANT or whatever their desk crap is called.
It is what it is– which is cheap. Psychologically I don’t think Jack or I would be happy with this downgrade. Honestly I’d rather have the Home Depot doors. Next.

Poppin’s Benching/Desk System.
For a hot second, I tought I found it. Their modular table/desk thing is pretty decent looking, and they have a reasonably priced big conference table. But they also have a stupid conference table that converts into a ping pong table, and that left a pretty bad taste in my mouth (see previous post about half pipes and other dumb stuff that doesn’t belong in the workplace).

On one hand, we really like the Poppin notepads we ordered for the office.
On the other hand, they make notepads and other desk accessories, and I was not really comfrotable making a $10,000+ purchase on some desks I could not feel. Sure, they look good in their cute little assembly videos, but what if it ended up being expensive particle board crap that fell apart?

But I love the modularity, so these guys were in the running.

Commissioning custom work from a local furniture maker.
We’ve seen so many wonderfully built out restaurants and whatnot lately, we figured we’d reach out and ask some local artisinal wood workers about building us some tables and whatnot. So, custom wood work is fairly expensive, but not unreasonably so. Quality materials and a craftsman’s time are both things we see value in investing in. However, the quotes were for large, fixed pieces of furniture. Based on our needs– and the overall trend to be more “mobile-ish”, we needed less Monolithic Slabs and more Modular Systems. Thanks, but no thanks.

“Real” Office Furniture (aka Steelcase)
Our Herman Miller chairs have served us well, and we appreciate (and make use of) the generous 12 year warranty, but one click glance at their website sent us running away. Perhaps if Mess were a Fortune 100 Healthcare System.

But we did find Steelcase.

Initially, I had not thought to look at them, assuming they were like Herman Miller and Knoll and equivalently out of reach. Then I noticed their online store had nice conference tables that were about the same price (or less) as the ones from the notepad company. Interesting. Digging a little deeper, I found they had a startup focused brand called Turnstone that was really speaking our language. In particular, we found the Bivi system.

Modular. Reasonably priced. And, most critically, they had the stuff setup downtown in the Merchandise Mart so we could go touch it. Awesome.

We did go touch it, and we fell in love. We then did a couple things.

First, we took advantage of their free planning service and uploaded our floorplan to the website and setup a conference call to chat.

Second, and the reason for the subtitle. I emailed my contact at Poppin, and not only told them that we went with someone else, but told them who won and why- in this case, having access to a Steelcase show room in Chicago was hands down the deciding factor.

All too often we are invited to submit a proposal or pitch a project only to never hear anything back. It drives me up a wall. Pitching takes time, energy, and resources, and sure, it is the nature of the business and you win some and you lose some, but please be considerate and follow up with the losers. Losing a pitch for Science Friday was the catalyst to redo our new business materials and website. It was the spark that got Mess 3.0 going. Feedback from a losing pitch is valuble. No feedback is infuriating and rude. So in this case, I wanted to treat others how I’d like to be treated and quickly and directly communicated the hows and whys. The vendor appreciated it, and I hope the karma points result in us being treated the same the next time a potential project goes elsewhere.

Anyhow, the design help we got from Turnstone/Steelcase was great, and we’re about to throw a hefty charge on the Amex. With furniture out of the way, technology infrastructure is up next. Stay Tuned!

Making Mess is a series of posts documenting the leveling up of Mess, a design and development firm I run with my partner and best friend Jack Shedd. We’re fortunate to have the help of a dozen really great people (plus a bow-tie wearing chihuahua named Rocky Balboa) and we’re determined to give them an awesome place to spend eight hours a day.

In Spotify there is a feature called my daily mix which...