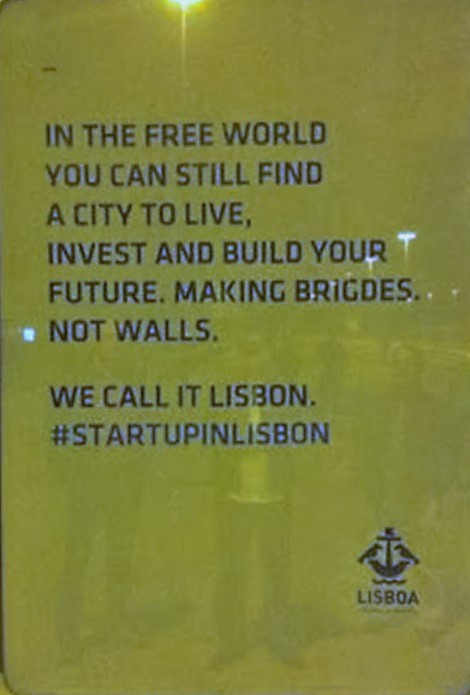 The #WebSummit conference is wrapping in Lisbon as I am typing this. If you don’t know what it is, the Websummit promotes itself as a technology conference centered on internet technology.

This has been my first conference of this sort. I am personally not a big fan of large events and at Triggerise we usually steer clear of conferences in general. Nevertheless I ended up attending together with a small team from Triggerise (we have a team based in Portugal) and perhaps some of my thoughts below are biased by my clearly limited understanding of the format.

Without further ado, here are some random thoughts, in no particular order:

Let me start with the good:

1. My favorite part of the conference by far were the pitch stages. I loved seeing the pitches and soaking in the energy of the founders. I wish there was more of that — essentially, that is why I came;

2. I also loved just striking random conversations with random people. There was no shortage of opportunities, with all the queuing and the waiting around (see below);

3. I also think that the City of Lisbon deserves a shout-out. Not for being pretty (which it is) but for the hard work that went into welcoming the masses of Websummiters. Free wifi everywhere (a lot more reliable in the city than at the Websummit itself, by the way) and a very good job promoting the city as a startup friendly environment. (Nevermind that it actually isn’t that startup-friendly, but that is a different story). Here is everyone’s favourite banner that went up all over the city the night of the US Elections:

Now, the not so good:

2. I came primed for a technology conference. But the whole thing was overwhelmingly salesy. In fact it was amazingly thin on technology. Given the size, this kind of makes sense. The content was designed for a very broad audience/ appeal, which means that it was all brought down to the lowest common denominator — mostly platitudes along the lines of “the future is mobile” and pseudo-inspirational salesmanship about the “start-up culture”.

3. In fact, throughout the event I constantly felt I am part of a machine designed to squeeze as much revenue (and clicks) out of me as possible. Endless push messages and emails from organizers flogging more and more things and baiting for clicks/ likes. The overall feeling that everything costs more money, the constant checks of the color of your tag to make sure you are in your right place; This in the context of a relatively high price for a regular ticket. Tellingly, before even the start of the conference, they started flogging tickets for next year’s event.

4. The profile of participants. I assume many startups coughed out the entry price in the hope they get to network and grab the attention of some investors or potential partners. I expect most of them to feel bitterly disappointed. Sure there were some big names attending, but they all seemed to be let in to do their spiel, after which they got ushered out through the back never to be seen again. The brave ones who made the effort to stick around after their talks found themselves quickly mobbed by masses of participants clutching business cards and stuttering pitches. Don’t think many investment decisions were taken in that format.

5. The format itself was also very 90s. One-way performances from the stage towards the masses, showmanship. Zero interactivity. I have been at public health events — a non-tech-savvy world if there ever was one — where people get to ask questions on social media using hashtags and the presenter answers a few of them out of principle. None of that here. Come on. It’s 2016. No-one needs to fly half way around the world to watch a canned presentation form some sales-person/ corporate rep that is freely available on youtube, right?

6. The format was also ridiculously rigged in favour of incumbents. I assume this is a matter of money (duh!), as well as network (middle-aged white men from San Francisco talking about a new world anyone?). Large incumbents manning booths the size of the whole pitch area. You had to go out of your way to even get exposed to anything new/ exciting. Startups paid through their noses to get access to small crowded booths where they were struggling to hustle for the attention of tired, zoned-out participants beaten by all the queuing and the salesmanship. We did not have a booth there, and boy am I happy we decided against it.

7. Logistics. Let’s just say there was A LOT of queuing and waiting around. Guards everywhere scrutinizing the masses suspiciously. Repeat checks of tags. Lines to go in, lines to go out, lines at the bathrooms, lines to have an overpriced bite. The event app itself was a shocker. A buggy, battery-hogging, spammy mess, forever crushing (help-desk: “The database froze, too many people”). The user experience part itself definitely feeled like an afterthought to what was essentially an extra pipeline to sell more stuff to participants.

I could go on, but you get the picture. Will I be back? Definitely not. Should you go next year? I don’t think you should. Not if you are a startup — there are millions of better ways to spend your scarce cash. Leave the #websummit to for the large incumbents to pat each other’s back.

Making the most of mistakes as a solo entrepreneur

3 Reasons Why Projects Fail and How Software Helps Avoid It