Home Entrepreneurship What a Pizza-Eating Champion Taught Me About Goals 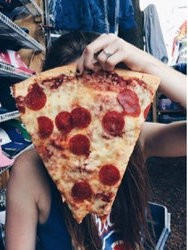 On Pizza, Projects, and Persistence

Not too long ago, I was employed as a salesperson by a chain sports nutrition store. Though it was a textbook retail job, I really enjoyed it. I have always had an interest in supplements and nutrition, so helping people find what would help them reach their health and fitness goals was somewhat fulfilling to me.

I also got to meet a lot of interesting characters.

One such character was a man who came into the store in the huge mall where I worked. He was wearing a shirt that read “pizza eating champion” — accompanied by the name of the sponsors and the chain pizza place that supplied the pizza. I knew that place. I loved their pizza. The slices were gigantic.

I had to talk this guy. I had a lot of questions. So when he approached the counter to buy his stuff, I broached the inevitable topic.

“Did you really win that contest?” I asked, with an almost interrogator tone. The man was not very large. He was thin, somewhat short, and not at all what I’d imagine a pizza-eating champion to look like.

The man smiled. “Yeah, I won last year. I figure I can wear the shirt until the next one.”

“Wow, that’s not a bad title to hold — even for a year.” I said genuinely impressed. “How many slices of pizza did you eat?”

“What?!” I said incredulously. “There’s no way you won a pizza-eating contest by eating one slice of pizza!”

The man gave an unexpectedly serious look and said, “There’s no catch. That’s the way you have to do it. I couldn’t go out and eat 9 slices of pizza — no one can. But what I could do is eat one slice of pizza — I’d done that a bunch of times. So I just kept doing that, over and over. That made it easy to do. All I had to think about was the slice on my plate. That was easy.”

Everything Big is Actually Small

That conversation has stuck with me. The way this pie-eating champ laid it out was so simple — stupidly simple. For any project, it’s actually counterproductive to think in terms of doing the project. You can’t do a project. What you can do is work the simple tasks that make the project. Pizzas and projects are very similar, as it turns out. The big thing is really just a bunch of small things.

I know this. I’ve known it for a while, but I fail time and again to think that way. I always think of things on a large scale — in terms of having to eat all 9 slices, rather than just eating one. I think we all do.

But like the man said, I can’t do a large project — I can only do the small tasks involved. To think about more than that is a waste of energy. Just this slice in front of me, that’s all I need to think about right now. There will be time later to think about how much I’ve already eaten, and how much I still need to eat.

You probably have at least one huge, daunting goal or project. When you think of getting it done, are you thinking about the whole pizza, or the next slice you can eat? Get clear with h yourself on that. It could be the difference between making good progress and defeating yourself.

No one eats a whole pizza. No one does a whole project. They take it one slice, or one task, at a time. We already do it. We just have to learn to think that way.

Mind Your Own Business