Home Social Media Who. Is. That!? 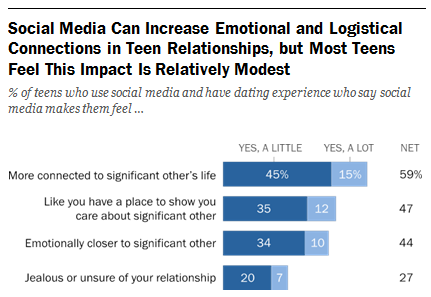 Jealousy. This one emotion can be powerful and rule a relationship. With the increase in the use of social media by teenagers, social networking sites either strengthen or weaken a relationship. A Pew Research Center study conducted in 2015, which focused on the use of social media in the context of teenage relationships, demonstrates that 60% of teenagers agree that social media helps them stay connected with their significant other (Lenhart, Anderson, and Smith). While this statistic makes it look like social media is good for relationships, it is imperative to notice that a more than one in four teenagers feel jealous or unsure of their relationship due to social media (Lenhart, Anderson, and Smith). Thus, even though many feel connected with their significant other, there are many that feel jealous and uneasy.

Teenagers, generally, are extremely emotionally volatile when it comes to relationships, and the prolific use of social media provides teenagers the opportunity to view content that causes jealousy (Darling and Cohan). In another study conducted by Pew, about seven in every ten teenagers have a Facebook account and about five in every ten teenagers have an Instagram account (Lenhart 27–29). With this amount of teenage users on popular social networking sites, it is likely that people will become jealous due to who is featured in someone else’s content.

Teenagers are also more likely to utilize more than one social networking site, which worries some teenagers in relationships. When the Pew Research Center interviewed one male high school student, he stated, “You use different apps to talk to different girls. You can text one girl. You can be Kik-ing another girl, then Snapchatting another girl” (Lenhart, Anderson, and Smith). This attitude exemplified not only demonstrates why having multiple social media accounts can cause nervousness among partners, but easily identifies why jealousy occurs in these relationships.

What Happened to Organic?