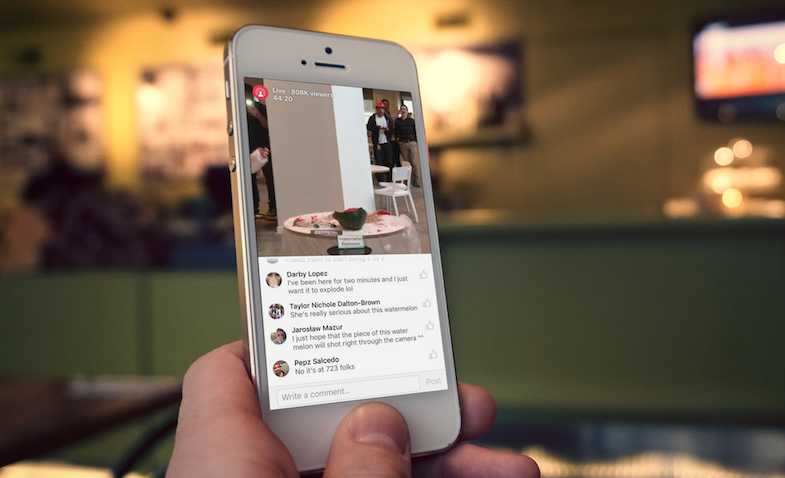 Fifty per cent of Facebook’s 185 million US users watch video daily and Snapchat users watch 10 billion videos a day. These are staggering numbers. We are now spending an average of 39 minutes a day watching video on a smartphone or tablet, an increase of 46% in three years. It’s no surprise that Cisco, the world’s largest supplier of networking technology, predicts that by 2020, 75% of all mobile traffic will be video.

Live social video has become the next step to connect with audiences keep them on their devices for longer. According to Facebook, users now spend three times as long watching live video as non-live video, which is why all of the major social platforms see that the future lies in live social video.

So how did the events of 2016 become the catalyst for this evolving medium and where did it start?

The rise of live social video

YouTube paved the way for video on the internet, but it was little known Justin.TV, now a billion dollar company called Twitch.TV, that started streaming live to viewers back in 2006. Ten years later, video streaming online is nothing new, but live video broadcast via various social media platforms is just hitting its stride.

With its semi-live ‘snaps’, Snapchat was a precursor to live social video. It was the arrival of mobile live-streaming app Meerkat [1]in 2015, quickly followed by Periscope, when true live social video really kicked off. Meerkat and Periscope were the first platforms to enable people to broadcast live content from their smartphones to other users around the world. Periscope was quickly picked up by the likes of London Fashion Week, whilst Meerkat was the darling of SXSW and people from all over the world were suddenly able to experience events in whole new way.

Facebook was late to the live social streaming party, but it is now very much the leader of the pack. While only available to celebrities and key influencers in mid-2015, ‘Facebook Live’ was released to all of its 1.7 billion users in December 2015. By June this year, it was reported that 1.9 million videos were posted, which were viewed 6.8 billion times.

When Twitter integrated Periscope into its feed and introduced auto-play in January 2016, it meant that the 300+ million Twitter users could view Periscope videos without downloading the app or leaving the Twitter platform. In July, Periscope enabled its videos to be embedded in websites via a link, and viewed much like GIFs. This further enabled Periscope-generated content to be spread to a wider audience beyond the Twitter and Periscope platform, a necessary step to increasing viewers.

As the godparent of online video, YouTube attempted live back in 2008, but closed the service down three years later. I’d argue it was insufficient smartphone penetration and inadequate telco data plans to support live streaming that led to the lack of success. Although still in beta, they recently announced the re-launch of YouTube Connect as a mobile platform. Similar to Facebook Live, the initial focus is celebrities, but it will be rolled out to the public shortly.

So live social video has no doubt landed, but what were the triggers that led to its explosive growth in 2016?

In July this year when police killed African American man, Philando Castile, during a routine traffic stop in the US city of Minnesota, Diamond Reynolds, the victim’s girlfriend, streamed the aftermath via Facebook Live. More than 2.5 million people ultimately watched the video and it became a significant moment for the Black Lives Matter movement. Later the same month when a sniper in Dallas, Texas, shot 11 police officers during a Black Lives Matter protest, local resident Michael Bautista, recorded and streamed the shootings, which were viewed more than 3 million times. The footage was widely broadcast by traditional media.

When OJ Simpson was being pursued by police in his white Bronco back in 1994 and when the plane crashed into the Twin Towers in 2001, we were all glued to our television sets. In lounge rooms and offices, we watched the events unfold as they were broadcast by official news outlets across the globe. Moments after the death of Philando Castile, people were watching the tragedy unfold directly on their phones in real time. More importantly, this news was broadcast by an ordinary citizen.

These social platforms have now brought a new level of transparency to news coverage in a way that’s never existed before. We’ve had the technology to stream, but never such easy ways to distribute and it’s made a world of difference. These examples demonstrate how real people now have the tools and platforms to disseminate uncensored news directly to the masses in real time.

Facebook Live’s partnerships with celebrities have also been pivotal in the explosion of live social video. Striking deals with celebrity chef, Gordon Ramsey, comedian, Kevin Hart, and author, Deepak Chopra, to create live videos to share with their fans has been a strong promotional tool for the platform.

In the past, it’s been difficult to get mobile video viewers to watch content for longer than 30 seconds due to the small screen and the quality of the content, but Kevin Hart is taking his fans behind-the-scenes of an upcoming show; Gordon Ramsey is performing live cooking demonstrations and Deepak Chopra is chatting directly to his audience about the meaning of life for longer than ten minutes at a time. The average time spent watching a branded video on Facebook is 30 seconds. These pieces of content are twenty times longer and are being watched by hundreds of thousands of viewers demonstrating that if the content and format is right, people will watch longer form videos on mobile. And this celebrity created content is helping to change user behaviour.

In addition to paying influential celebrities to use the Live platform, Facebook also partnered with media heavyweights such as, The New York Times and CNN, to create live social content. It is said to have brokered over 140 deals across publishers and celebrities totalling US$50 million. The New York Times and BuzzFeed were paid in excess of US$3 million each to create original content.

Experts at social sharing and producing click bait content, Buzzfeed had 800,000 live viewers hooked when they filmed two employees putting rubber bands around a watermelon for 45 minutes until it exploded. It could only be viewed via Facebook Live and has now drawn close to 11 million viewers. Of course, when the video is 45 minutes long and you’re not watching it live, you know it logically means it will take close to that time for the watermelon to explode, which removes some of the drama and suspense. Like anything, this type of content is better watched live.

On the other end of the spectrum, The New York Times, known as one of the most credible news outlets in the world, started creating live video content for Facebook in April. The most popular piece to date was created by young video journalist called Deborah Acosta inspired by a trashed box of Kodachrome slides she found on the street in New York. Its owner unknown, she started filming as she unpacked the contents of the box wondering where it came from. It could have amounted to nothing, but the success of the piece came down to audience interaction. With information submitted by viewers, the clues eventually led to Mariana Gosnell, also a journalist, who died back in 2012. This transformative piece of journalism, once again only available to be viewed on Facebook, attracted over 400,000 viewers.

Because the world is addicted to watching sport

Sport remains one of the few forms of entertainment that continues to be watched almost exclusively live, that hasn’t changed, but the type of experience people are looking for whilst watching sport has evolved. Already, 42% of sports viewers in Australia are using smartphones whilst they watch to access additional content and engage with other fans, making secondary viewing experiences widespread.

In the world of live social video, most of the major platforms have been working to cut deals with sports leagues to offer a greater experience to viewers. It is now possible to watch games, highlights or get behind-the-scenes access through many of the major sporting codes globally. Periscope was allowed into the locker room prior to the much-hyped boxing match between Pacquiao vs Mayweather last year offering viewers a rarely seen side to professional boxing.

The Twitter-owned platform also recently tapped into its parent company’s deal with the NFL (National Football League) to broadcast the very popular Thursday night football. As a result, Periscope users can access pre-game content, such as live streaming interviews with the players and commentators to get a more immersive experience in the lead up to the match. The NFL understands that sports viewing is evolving and it has to adapt its offering to keep its audience engaged and happy. By partnering with organisations, such as Periscope, it is providing their viewership another layer of experience. In Australia, Twitter will for the first time be streaming from the Melbourne Cup. While not streaming the actual race, they will be carrying both short and long form content of the day. Channel 7 is the official broadcast channel, but people will have an alternative online.

The Rio Olympic Games were also important for Facebook Live. They worked with a number of global broadcasters, such as NBC and the BBC, as well as national Olympic committees to create live content. Most of the broadcasters used Facebook Live to conduct interviews with athletes and offer behind-the-scenes footage. CNN created additional travel-inspired content taking its followers on a tour of Rio to meet the locals, learn about the locations whilst answering direct questions.

Facebook also partnered with key athletes, such as multi-gold medal winning US swimmer, Michael Phelps, who they paid $200k to use the platform during the games. He broke the news of his retirement exclusively on Facebook Live over the course of 60 minutes, attracting 4 million views. To put the success of Facebook’s partnership with the Olympic Games in context, it reported, ‘277 million unique people had 1.5 billion interactions during the games.’

So what does the future hold?

Up close and personal directly with celebrities, new companion experiences for sport and being able to stream news live from the source are unique to live social video. Twitter, Periscope and Facebook Live are working to get users to consume more content through their platforms, but the next important step will be shifting this viewing behaviour to create more user-generated content. With its ability to be real time and reactive live social video has the potential to be a threat to traditional broadcasters. We are still in the early days, but with all of the major platforms investing heavily, it has the power to do more than just disrupt TV and online content, it could change the very way we interact with news and entertainment.